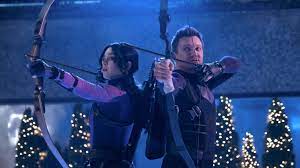 Hawkeye on Disney+ is Marvel Studio's Christmas gift to Avengers fans – and anyone who likes an action-packed show. Set in New York City at Christmas time, there is one luscious scene after another of the Big Apple decked out in all its holiday splendor. The city is the backdrop for all the action that takes place as former Avenger Clint Barton (a terrific Jeremy Renner) teams up with young Kate Bishop (the amazing Hailee Steinfield), who has been a fan of his ever since she was a little girl and saw him fighting the Chitauri in the Battle of New York (The Avengers 2012). 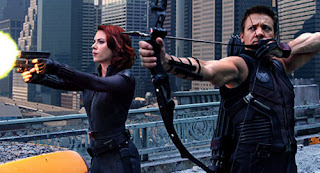 In The Avengers Barton came under Loki's (Tim Hiddleston) mind control until Black Widow/Natasha Romanoff (the great Scarlet Johansson) knocked Barton unconscious (and literally knocked some sense into him). After that the two of them worked well together seamlessly, with them being like a one-two punch in any battle. They shared the hardships they had been through and their difficulties of being part of the Avengers team, and became if not best friends more like a brother and sister.

Why this is important is because when young Kate wants to partner with him, Barton is hesitant because not only does he know it's dangerous work, but also because he lost his last partner – Natasha died during the events of Avengers: Endgame (2019), and he doesn't want to lose her too.

Barton is visiting with his children to experience New York at Christmastime. Meanwhile, Kate attends a charity function with her mother Eleanor (Vera Farmiga) who is engaged to the suave and silly Jack Duquesne (the hilarious Tony Dalton). While not trusting Jack, she follows him down to a secret charity auction that he attends with his Uncle Armand III (Simon Callow). They are auctioning off items from the Avengers' destroyed New York headquarters. One of the items is the Ronin suit (which Barton wore in Endgame when he started slaughtering bad guys because he lost his family during the Blip caused by Thanos (Josh Brolin), wiping out half of the people on Earth. 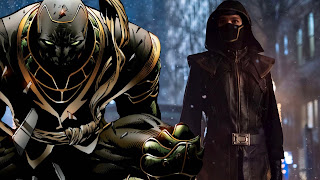 The auction is interrupted by the Tracksuit Mafia (a Russian gang that wears tacky tracksuits) bombing their way through the basement wall in search of a special watch. In all the confusion, Kate steals the Ronin suit, puts it on, and battles and defeats the gang. When she goes to find Armand III to get some answers, she discovers he has been murdered. Outside, the Russians surround Kate after she rescues a stray dog, but Barton (who saw the action on TV in his hotel room) rescues her. 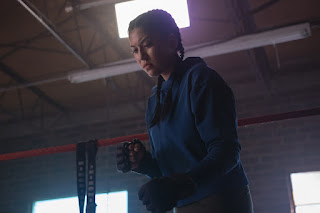 This puts them on a collision course with the Russians, and after they capture Clint and Kate and start interrogating them about Ronin, we discover who their boss is – Maya Lopez (an impressive Alaqua Fox). Apparently, she wants to know who Ronin was because she wants to kill Ronan for killing her father during Barton's time of unhinged murder. Barton tells her that Black Widow killed Ronin – which is essentially true because Natasha stopped Barton's killing spree.

Eventually Barton and Kate escape from the Russians, but now the situation is even getting more muddled. Is Jack Maya's mysterious boss? Will Eleanor ever believe Kate when she tries to expose Jack as Armand III's killer? If Jack is not the boss, who is "the big guy" and why does he want to kill Barton and Kate? What is so important about that watch stolen by the Russians and to whom did it belong? It seems very important to Barton to get it back.

The rest is spoiler territory, and there are a few surprises and Marvel Cinematic Universe Easter eggs throughout. The series is beautiful to behold; as mentioned before the city and the action sequences are amazingly captured, with kudos to cinematographers Eric Steelberg (three episodes) and James Whitaker (three episodes), and the music by Christophe Beck and Michael Paraskevas is booming in the MCU tradition and captures the fury and intrigue as needed.

Jonathan Igla (series creator and head writer) gets the MCU right, and this canon miniseries gives us a better look at Clint Barton. Renner shines as the Avenger who seemed to not get as much screen time as the other ones who had superpowers, which is one of the things I liked about the character. His partner Natasha also lacked superpowers, and maybe that's what made their pairing all the more interesting. 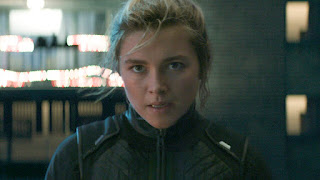 It will not be surprising for you to know that Natasha's younger sister Yelena Belova (an outstanding Florence Pugh) is also in New York to kill Barton. If you recall at the end of the underrated film Black Widow (in a post credits scene), Yelena was told that Barton killed her sister by Contessa Valentina de Allegra de Fontaine (Julia Louis-Dreyfus). Who is the Contessa working for? I think I have an idea but won't reveal it here.

I'm not sure if there will be a season two of Hawkeye, but there should be. Truthfully, Barton gets battered and bruised a good deal here. When people realize he was an Avenger, he gets either a pass for whatever is happening or praised for "saving the world." Renner plays him as grizzled and weary and perhaps ready to retire, but Kate ups his game, and he even says that she makes him better. 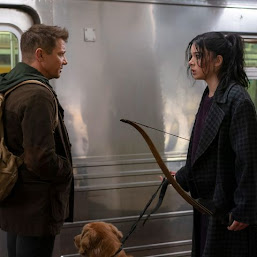 There is terrific chemistry between the two leads, and while the Barton-Romanoff  partnership just made sense, the Barton-Bishop one does too, but here it is more like a father-daughter duo. Kate clearly idolizes Barton and wants to be like him (he's why she took up archery in the first place). They don't actually save the world here, but they kind of save New York and, in the process, save themselves too.

Hawkeye is a fine addition to the MCU, and Renner and Steinfield shine. The story is fresh, exciting, and feels nothing like more of the same, with a fan of an Avenger becoming his protege. While Barton was an Avenger and much of what happens plays off that history, this is a new story that takes Barton to task for his time as Ronin and the other demons that plague him (especially feeling responsible for Natasha's death). His actions after that dark time –  and his efforts with Natasha to collect the Soul Stone on Vormir – certainly redeem him in the eyes of young Kate and the audience. 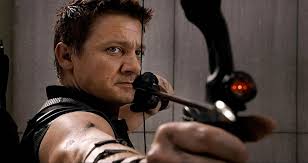 I enthusiastically recommend Hawkeye, which hits the bullseye and then some. I believe it will become a great addition to your annual holiday viewing library. I know I'm adding it to mine.