Movie Review: 'Spider-Man: No Way Home' Opens the Door to the Multiverse 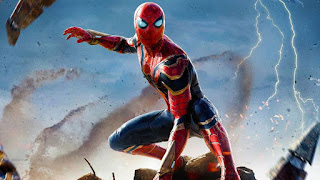 Spider-Man: No Way Home opens the door to the multiverse. and in doing so brings back beloved characters from the SONY Spider-Man films. Rarely have I heard audiences erupt in rapturous applause as when each character from those past films starring Tobey Maguire and Andrew Garfield as Spider-Man made an appearance. When these past Spideys popped up on screen, the packed house howled and cheered. It's kind of a reminder of how well loved those actors were in that role.

While I tried not to click on anything about NWH until seeing the film, word of mouth sort of let me know that past villains from those SONY films would be appearing. I found that tantalizing because, before I knew about this, I figured in the aftermath of Avengers: Endgame, our surviving heroes would be all going off into different directions and living their lives and fighting battles on a much smaller scale, but NWH ups the ante considerably by bringing in multiple villains who are each formidable opponents on their own.

Director Jon Watts has done an extraordinary job of taking on what is an inevitable blockbuster and making it – despite all the battles, mayhem, and destruction – a story of human love and loss. While I also like Maguire and Garfield in the respective turns as Spidey, something about Holland's youthful effervescence has endeared him to me. Maybe it was the way Holland's Peter Parker was brought into the story by Tony Stark (Robert Downey Jr.), without an origin story of his own and instead just jumping on board and joining the Avengers. 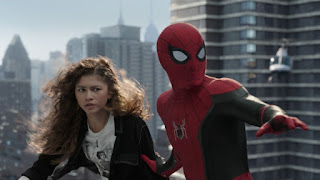 NWH picks up immediately where the story in Spider-Man: Far From Home left off, with Spidey's identity revealed to the world. The aftermath of that reveal puts him and his love MJ (a terrific Zendaya) on the run, but not for long. Once the world calms down around them, they go back to school and try live normal lives and wait for acceptance letters to colleges. The plan – for Peter, MJ, and best bud Ned (the hilarious Jacob Balaton) – is that they will all be accepted at MIT and start over again in Boston. Unfortunately, due to their exposure as cohorts of Peter/Spidey, Ned and MJ get rejected and Peter is rejected as well.

Believing he has ruined his friends' lives, Peter seeks help from former fellow Avenger Dr. Strange (Benedict Cumberbatch), who is cranky as ever. Strange at first doesn't want to help, but he remembers all that they went through together fighting to save the world. He even admits that he forgets that Peter is just a kid. He agrees to cast a spell that will make the world forget that Peter Parker is Spider-Man. Unfortunately, due to Peter's worries about his friends and Aunt May during the casting of the spell, Peter keeps interrupting things and the spell goes awry, but Strange is able to contain it in a special box called the Machina.

We soon learn that the spell caused a sort of breach in the multiverse, calling into this universe anyone connected to Spider-Man. This paves the way for the arrival of past villains from SONY's Spider-Man and The Amazing Spider-Man franchises. Before we know it,  Doctor Otto Octavius/Doc Ock (Alfred Molina)) is battling Peter on a bridge and reminding us what a delight that character could be.

Soon afterwards Ock is contained by Strange in an underground prison and is confused as to why Peter is not his Peter. Strange reveals that villains from other universes have now invaded this one, and that Peter must capture them all before it is too late. 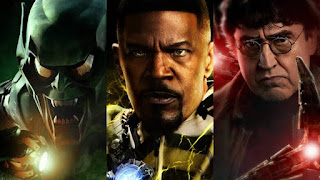 Somehow Peter battles and then brings in the rest – Max Dillon/Electro (Jamie Fox), Dr. Curt Connors/The Lizard (Rhys Ifans), and Flint Marko/Sandman (Thomas Haden Church). Norman Osborne (Willem Dafoe) comes in to the outreach where Peter's Aunt May (Marisa Tomei) works, as he battles back against his Green Goblin side and seeks help. Each character is given a chance to remind us about who they were in the past films, but Strange has no sentimental feelings about their hard luck stories and is determined to send them back to their own universes, with disregard for the fact that they are going back to certain death at the hands of their universe's Spider-Man. 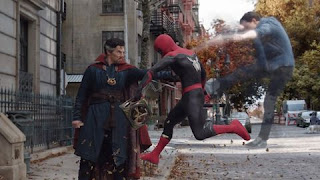 Strange is about to push the button on the Machina, but Peter feels that these people deserve a second chance, so he swipes the Machina, and a battle between him and Strange ensues. It's always fascinating to watch fellow superheroes go at it – reminding us of the painful battles of Captain America: Civil War (2016) – and Parker and Strange have what is probably the best fight in the film except for the large battle at the end.

Parker eventually evades Strange and leaves him hanging in limbo somewhere. taking the Machina and Strange's Sling Ring (which allows him to open portals). Returning to MJ and Ned, the group decides to give the trapped villains a second chance. Peter gives Ned and MJ the Sling Ring and the Machina, and they go hide and wait to hear from him. The villains know that Peter saved their lives, so they go along with him to Happy Hogan's (Jon Favreau) apartment, where they attempt to find cures for each of them with a Stark Industries Fabricator that Happy just happens to have in the apartment.

During this experimentation phase, Peter gets to talk to each one (except The Lizard who stays outside in a truck). It's apparent that none of them wanted to be villains, but whatever took over their personalities made it hard to resist. Peter gives Ock a replacement chip for the tentacles and his mind, and also places a device on Electro to take away his powers. Unfortunately, Osborne reverts to his Goblin personality, causing everything to fall apart; a battle ensues between Peter and the Goblin, devastating the building and endangering everyone in it, including Aunt May.

MJ and Ned, worried about Peter, try to use the Sling Ring to find him, and they do find Spider-Man, but not the one from their universe – they get Peter Parker (the Andrew Garfield version). Another attempt brings them Peter Parker (the Tobey Maguire version). While it's clear that their Peter is in great trouble, the other Parkers offer their help because they are aware that their former enemies are now threatening this universe, but also realize that this universe's Peter is not just trying to stop the villains but wants to save them. Can they all work together to stop and save the villains before Strange comes back and sends the villains to certain deaths?

Since what has come before this are spoilers that are out there already, I feel I must stop here not to ruin the rest of the way. This film has everything you would expect from Marvel as it has achieved expertise in the explosive, action-packed films its fans want. but Watts also infuses this entry with amazing heart and soul, What really rises to the top is Holland's Parker and his inherent good heart. His love for MJ, Ned, and Aunt May drive him, but he also loves his city and its people. It's also this internal goodness that makes him want to save these villains, even though they seem hopelessly lost to their demons. 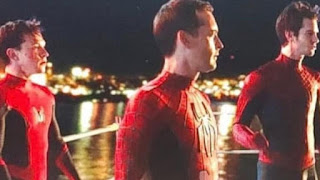 Bringing the three actors who have played Spider-Man together is a bold move that pays off here. Each one shows why we were rooting for them in their films, and the interaction between them is brotherly and loving. It's as if they all know the deal – wearing that suit comes with a heavy load and brings a commitment. As Aunt May says in this film, "With great power comes great responsibility!" That is something that all three Parkers know, and we as an audience appreciate that the Parkers take on this challenge despite everything stacked against them.

I highly recommend this film as great entertainment that doesn't lose sight of the human and humane factors. The ending will blow you away with how it leaves things, and don't forget to stay for two post credits scenes as they lead into things to come in the MCU.

Please check out these trailers: