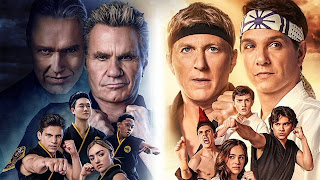 In Cobra Kai season four, there is a new threat from an old enemy. Anyone familiar with The Karate Kid film trilogy  starring Ralph Macchio will recognize his scary face. It is Terry Silver (a still frightening Thomas Ian Griffith) who is coaxed back to the Cobra Kai dojo by John Kreese (Martin Kove) because he needs his special talents to help defeat their old rival Daniel LaRusso (the ageless Macchio) who has teamed up with their former student Johnny Lawrence (William Zabka) to defeat Cobra Kai in the All Valley Tournament.

The series just like the films is all about the tournament. How the students and their senseis get there is another story. Daniel is intent on teaching the tried and true method as taught to him by Mr. Miyagi (the late great Pat Morita), but Johnny is convinced that will not work against Cobra Kai now that Silver is back in town. Of course, this causes a good deal of conflict between Daniel and Johnny, and their  students take note of the increasing tensions.

Silver is living the good life in a seashore mansion when Kreese comes to see him. Flashing back to The Karate Kid III, Griffith portrayed Silver as a sadist who took delight in torturing fledgling student Daniel, who briefly comes under his tutoring in hopes of defeating his bullies with a new style. All these years later, Silver has put that behind him until Kreese reminds him of how he saved him back in Vietnam. Eventually, Silver steps back into the dojo and changes everything.

At the heart of the films was Miyagi and Daniel's relationship. Miyagi was not just teaching Daniel karate, he was teaching him a way of life. Miyagi's karate was for defensive purposes only, and his goal was for Daniel not just to defend himself but to live of life of balance and honor.

In the series Daniel has been taking a similar approach with his students, especially with Miguel (a terrific Xolo Mariduena). Miguel is a lot like Daniel was in high school, but he is a bit more confidant and sure of himself. He wonders if

Daniel's methods will work, but he definitely knows that the extreme type of karate at Cobra Kai is not right for him.

Daniel's daughter Samantha (Mary Mouser) and Johnny's son Robby (Tanner Buchanan) add complications to the situation. Once romantically involved, Mary is now back with he ex Miguel who used to date bad girl Tory (an impressive Peyton List) who is Sam's arch enemy. Tory is now involved with Johnny, so the plot more than thickens.

When Johnny and Daniel finally realize that they cannot work together, a group of students breaks off with Johnny  to form Eagle Fang Karate. They are training with him for the tournament. Another contingent (including Tory and Robby) are training under Kreese and Silver at Cobra Kai, while Miguel, Sam, and the others stay with Daniel to train the Miyagi way. They will all "settle it on the mat" at the tournament, so conflict between the three dojos continues to rise.

The obvious question is who will win the tournament? Which pair of fighters will it all come down to? Will Daniel and Johnny continue to clash – to Kreese and Silver's delight – or will they find a way to defeat Cobra Kai once and for all? This is all spoiler territory, so I'm not going to reveal anything now.

Showrunners Josh Heald, Jon Hurwitz, and Hayden Schlossberg have done an amazing job of honoring the legacy of the films while making the series new. Bringing in old characters from the films is proof that the impact they had then and how they still matter now. Seeing Daniel's mother (Randee Heller) now is a great way of making connections to the past.

In the beginning of this series, much was made of Johnny being a down and out handyman since Daniel defeated him at the All Valley in 1984.  Daniel being a successful owner of a car dealership doesn't help matters; however, Johnny has come a long way in these four seasons. Not only has he picked himself up from the bottom, he has started his own business. He has even started dating Miguel's mother (Vanessa Rubio), which doesn't necessarily make Miguel too happy. Still, it's a big step in the right direction for his character who was always likable even in the films but totally misguided by Kreese.

Cobra Kai is well worth your time even if you're not a of of the films. If you are fan of the films, then you will delight in how the series honors them and keeps true to the storyline. Macchio has even talked about what things are "canon" in the series and the films, so you know he realizes how important staying true to spirit of the legacy is to the fans.

Cobra Kai season four and seasons 1-3 are available to watch now on Netflix. Grab a bowl of  popcorn and get ready to binge to your heart's delight. You'll be glad that you did!  Please check out the trailer below.