TV Review: 'The Beatles: Get Back' Depicts a Time When All Our Troubles Seemed So Far Away 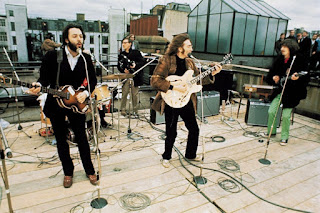 The Beatles: Get Back depicts a time when all our troubles seemed so far away. This was when The Beatles were still a band and hope remained that they would continue that way. This new Disney+ offering has Peter Jackson (The Lord of the Rings) adroitly at the helm as director and producer, and he has crafted an eight-hour documentary delight that will more than please true Beatles fans and surprise and amaze those who are just climbing aboard this celluloid dream cruise containing the magical quartet of John Lennon, Paul McCartney, George Harrison, and Ringo Starr. 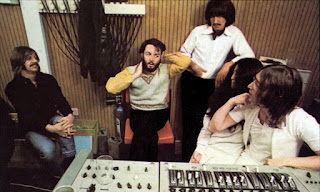 60 plus hours of film were shot in January 1969 by director Michael Lindsay-Hogg, who was given previously unheard of access to the Beatles as they prepared under the gun (a deadline they imposed on themselves) to write 14 songs, record them for a film, and then have some kind of spectacular live event to play the songs in a public performance for the first time in three years.

Eventually some of this material was used to make the tediously boring film Let It Be (1970), directed by the aforementioned Lindsay-Hogg, whom we see throughout the documentary as being particularly clueless as to what made (and still makes) the Beatles an iconic band. His suggestions for a live venue on a cruise ship (which George calls "insane") or an orphanage pretty much make it clear why his film sucked. Kudos to Jackson for leaving in the parts that reveal Lindsay-Hogg in all his dubious glory.

Jackson more than makes up for the past filming blunders and, if nothing else, we have to give Lindsay-Hogg credit for getting access and sticking cameras everywhere except the bathroom. There is also an incredible sequence where John and Paul go off camera for a private conversation about George. This is after George has quit the band with a parting "See you in the clubs" that really hurts the other band members.

John and Paul are going back and forth about George, unknowingly being recorded by a hidden microphone in a flower pot. Devious? Despicable? Yes, but also delightful. There is a deep sense of ownership that John and Paul take concerning George's grievances. And, while it is obvious that their albums contained mostly work written by Lennon and McCartney, George's attempts to get noticed and have his songs produced and on records is acknowledged by John and Paul, and they more or less agree that they have handled things the wrong way.

Despite the its length and being released over three days (all episodes are now available, so binge away), the documentary is a testament to the band members' love and respect for each other. When John calls Ringo "Richie" you can know the love between them is real. John and Paul come off as particularly caring about one another, and either one can set the other off on tangents that make recording sometimes impossible. This comic banter in the studio is part of what makes The Beatles: Get Back so golden. 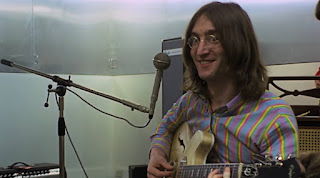 With the cameras always rolling, the quartet and those around them seem to forget at times that the cameras are there. When they are into deep conversations, one of them looks up and gives a deer in the headlights stare, meaning he's remembered that they are being filmed.

What this film basically comes down to is seeing the Beatles go to work every day –  and there is a good deal of smoking and drinking that no doubt slows down the recording process – and that is something many fans, including yours truly, have wondered about for years. Also, some standard notions about the group, for example, that Paul and John had quit collaborating, are blown out of the water as we see Paul share "Get Back" for the first time with John, and how they are going back and forth as creators who really show respect for each other. 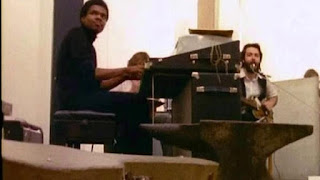 One of the highlights of the film involves American musician Billy Preston dropping by for a visit. We are told that Billy was George's friend, and it's obvious there's mutual respect for a fellow who can really play that keyboard (and had worked with Ray Charles and Little Richard). Somehow or other Billy sticks around, and his contribution on tracks like "Get Back" are unforgettable. There is also an interesting scene when the band discusses Billy's compensation and even bringing him on board as a fifth Beatle. It is amazing that they even had this conversation, and it is testimony to Billy's amazing talent. 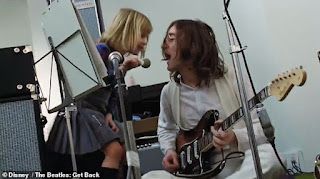 There is another aspect that the film uncovers and makes salient – the band members are like family. John and Paul joke about their close relationship, and there is a sense that the quartet thinks of themselves as brothers. They may bicker and not get along or disagree about things, but they are protective of one another. This familial bond extends to girlfriends and wives and even, as depicted in the film, to children. One day Linda brings her daughter Heather to visit the studio, and she is running around and joking with John, George, and Ringo like they are her uncles. This shows their softer side –  especially of John – who sings with her and even calls her "Yoko" when Heather copies Yoko shrieking into the microphone. It is only a short sequence, but it tells us so much about the way the band cared about one another and those who mattered to them. 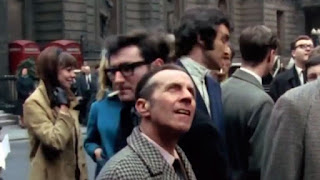 Another thing that is important is that the film is like a time capsule. It captures 1960s London, which like 1920s Paris, is an iconic decade of fashion, music, and culture. When the cameras take to the streets as the Beatles are playing up on the roof of Apple Corps on Saville Row, we witness a wide array of people and their reactions to the sweet music they are hearing. It is amazing to see what people are wearing and how they are thinking. Overwhelmingly, even older people told the interviewers how much they liked and appreciated the Beatles, but most of them wished they were down on the ground so that they could see them performing.

Getting to that moment of the concert on the roof almost didn't happen. As we see these young men – and the film more than anything proves how youthful they still were in 1969 – trying to write and then play their songs, time increasingly becomes a factor. The idea of a huge blowout in a large venue falls apart because the collaborative process takes time, and we get to see that happen each day. 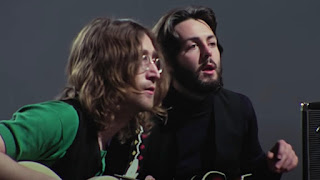 By the time they are going back into the studio in January 1969, they have been without the guiding hand of manager Brian Epstein who died of a drug overdose in 1967. Over those two years it is noted that Paul sort of stepped into Epstein's shoes. John even calls him "boss" in a sequence where Paul notes that he more or less had to take the reins because there was no one else. Over that time enormous changes came into their lives and relationships. Paul even mentions their memorable trip to India and sort of praises his former love Jane Asher, John's wife Cynthia, and George's wife Patti. John wistfully agrees with him.

At this point John is with Yoko, and Paul is with Linda Eastman. It is interesting to see Yoko and Linda in the studio as John and Paul work, but I have a new appreciation for them both as they are totally unobtrusive. Yoko sits quietly fiddling with things or writing, and Linda watches silently on the sidelines. There is one sequence where Linda and Yoko are sitting and having what seems to be a deep conversation, but it is not audible and that is a shame. Also, toward the end of things when they are listening to the tapes of the rooftop performance, Maureen Starkey (Ringo's wife) can be seen bopping her head and rocking out. She is the only girlfriend/wife who can say she was a fan from the very beginning, having been in the audience way back in the Cavern Club in Liverpool.

The film captures a moment that was the best of times and the worst of times.  The Beatles were still a band, but as intelligent, talented individuals their paths were starting to diverge. George talks about having so much material that he'd like to make a solo album, and we can see Yoko being supportive of him, probably intuitively knowing the same idea can apply to John. The constrictions of being "a Beatle" now start to reveal themselves, and even the idea of this live performance divides the band because each member wants something different. There is nothing wrong here; it's a natural evolving of super talented people who want to grow and explore new ways of expressing themselves. The rooftop performance (seen in its entirety for the first time) is a magical delight. The band performs admirably and glowingly –  even John, who is complaining about his fingers being too cold to hold the guitar pick seems thrilled to be playing a live gig again –and seeing the people on other rooftops waving and watching the performance is exciting. There is even a sequence of a hidden camera picking up the police who come into the lobby in the building below after receiving "30 complaints" about the noise from the concert on the roof. One of the bobby's even asks "is this necessary?" about the filming. Their hesitation to do anything about it proves that indeed it is.

After watching the The Beatles: Get Back, I felt elated but extremely sad. While I loved getting to see my favorite band up close like this, I also mourned their loss. Unlike the Rolling Stones, the Beatles were not meant to be together forever. Paul does say something about when they are all very old they would just get together and play music like they always did. What a sublime fantasy for the young Paul, unaware of what the future had in store for them. While I loved the film, it reminded me that it captured a yesterday when all our troubles were so far away. We will never know that bliss again, but at least the film lets us dream for eight hours. After enjoying the movie and letting its impact resonate, I know in the harsh reality of the present that it's best to just let it be.