TV Review: ‘Obi-Wan Kenobi’ – The Force is Strong with This One! TV Review: Obi-Wan Kenobi– the Force is strong with this one! The idea that Ewan McGregor and Hayden Christensen are back in the roles of Obi-Wan Kenobi and Anakin Skywalker/Darth Vader gives me goosebumps. As we see in this series, their bond as Jedi brothers is stronger than either one of them would be willing to admit, but there is also the notion that there are worse things than death, and both Obi-Wan and Anakin find this out the hard way.

The Director Brings It All Together 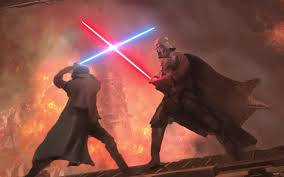 The six episodes of this limited series are all directed by Deborah Chow, and having that same guiding hand to steer the ship all the way seems like one of the smartest choices Disney has made in a long time. Chow and the writers’ obvious reverence for the prequel trilogy and original trilogy bring huge rewards here. And while the story may not start out where you want Obi-Wan to be, the truth is he is where he has to be for everything to make sense.

When we witness Obi-Wan working as a laborer in a meat factory on Tatooine, it seems disappointing to say the least. While it’s not exciting, it makes sense that he now goes by the name of “Ben” and wants to be as inconspicuous as possible. After trying to leave a toy for young Luke Skywalker (Grant Feely) at the moisture farm and being stopped by Luke’s Uncle Owen (Joel Edgerton), Ben is then confronted in town by Owen and told to stay away from Luke.

The Empire Is Striking Back! 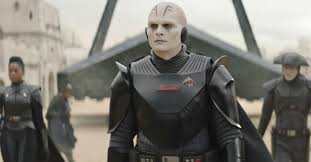 At this time there is a surprise arrival of an Imperial ship, and soon the Grand Inquisitor (Rupert Friend), the Fifth Brother (Sung Kang) and the Third Sister/Reva (an impressive Moses Ingram) enter town looking for Jedi (most in the audience will recognize the characters from the animated series Star Wars Rebels)..When questioned if he knows of any Jedi in a fiery interrogation by Reva, Owen says that he does not. A warning is dispatched to everyone in town that Jedi must be turned in or their lives will be in jeopardy.

Ben goes back to the cave where he lives, and we see the desperate circumstances of his living arrangements. He has fallen away from the Force in order to totally be unknown, and has done such a good job that he has forgotten in some ways who he was. When he tries to connect with his old master Qui-Gon Jinn (Liam Neeson), he cannot even muster an ounce of his old power. It is disturbing to see him so low, but circumstances will soon thrust him into a situation where he must regain his powers. 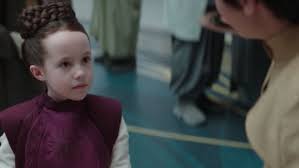 Unexpectedly, the scene shifts to the planet Alderaan, where we encounter ten-year-old Princess Leia (a precocious but adorable Vivien Lyra Blair) who is causing trouble in her palace for family and cousins who taunt her about being adopted. Her father, Senator Bail Organa (Jimmy Smits), tries to talk sense to her and warns her about going out alone. Of course, as the daughter of headstrong Padme Amidala (Natalie Portman), Leia is not going to be kept inside for too long.

Unfortunately, on one of her rebellious walks in the woods with her little pet droid Lola, Leia is abducted by Vect Nokru (Flea) and his gang. They have been hired by Reva because she discovers Kenobi’s connection with Senator Organa. Reva believes that Obi-Wan will learn of her abduction and come out of hiding to save Leia. Reva is doing this because she knows that Kenobi is the Jedi Darth Vader wants to find more than any other, and Reva will do anything to score points with him.

Ben Is Shaken By His Failure

When going through town after work, Ben sees Nari (Benny Safdie), a young Jedi who asked for his help, hanging in the town center. Ben was afraid to help him, and now feels guilty about the young man’s death. When he gets back to his cave, Ben gets a message from old friend Bail Organa asking for his help. Leia has been kidnapped, but Ben refuses at first, saying that he cannot leave Luke to do this.

A Cry for Help from an Old Friend

When Bail comes to see him and personally asks Ben for help, the senator explains that Leia is just as important as Luke. Ben agrees to go after her and bring her back home. After Bail leaves, Ben goes out into the desert and digs up his lightsaber from Tatooine’s sands. This is the planet where Anakin was born, and he hated sand, so there seems to be some sort of resonance with the burial of a lightsaber and the end of a Jedi’s life. For all intents and purposes, Obi-Wan has been "dead" these last ten years and now, as Ben retrieves his lightsaber, Ben becomes Obi-Wan again, but that doesn’t mean the road he must travel will be an easy one. In episode two we get to see Anakin floating in a bacta tank. As mentioned earlier, there are some things worse than death, and for Anakin it is this constant pain and suffering that fuels his anger and desire for revenge. Obi-Wan left Anakin for dead after their battle on the lava planet Mustafar in Revenge of the Sith, and now these daily bacta baths are reminders of what Obi-Wan did to Anakin. Anakin has lost everything – his father figure (Qui-Gon), his mother Shmi (Pernilla August), his brother Obi-Wan, his wife Padme, and their unborn child. The only thing left for him is a lust for revenge to quench the fire of pain in his life.

Obi-Wan too has lost everything. The Jedi Order that meant everything to him is in shambles. The rising Empire is killing who is left of his kind, and he has lost his connection to the Force. He lives in a cave and has a terrible job, and he cannot even connect with the last family member he has left – Luke Skywalker. His mission to go save Leia has another purpose – it is probably his last chance to save himself. 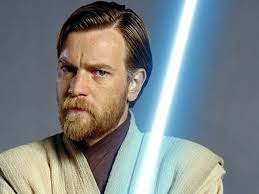 Obi Wan Kenobi is a love letter to the fans, and Deborah Chow should be worshiped by fans for her adherence to the story without all the deviations that occurred in the sequel trilogy. McGregor should be praised by his powerful, nuanced portrayal of the one of the most beloved characters. It is obvious with every word uttered, every facial reaction, and his at first choppy handling of the lightsaber to his return to slick form, that McGregor was 100% invested in this role, and the results are apparent on screen

The music is a phenomenal combination of Natalie Holt’s original score including the theme and classic John Williams compositions that will definitely get your heart beating, especially when you see Vader sitting on his throne.

I highly recommend Obi-Wan Kenobi. All six episodes are now streaming on Disney+. Grab a bowl of popcorn and enjoy the ride, and may the Force be with you!!