TV Review: HBO Max's 'The Tourist' Emphasizes the "Out" in the Australian Outback 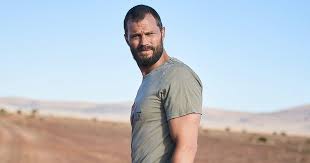 HBO Max's The Tourist emphasizes the "out" in the Australian outback. If you wanted to drop your characters into one of the most isolated areas on the planet, this has to be it. Setting is a key factor to the tone of the series, a sort of barren landscape that is an "out there" that can be seen almost like an alien planet. This deliberate stranding of the protagonist in a wasteland does make this a bleak character building device.
Series directors Chris Sweeney and Daniel Nettheim (who each directed three episodes) keep the story moving at a steady pace, and the writing team of Harry and Jack Williams really gives the actors plenty to sink their acting shops into.
And what fine acting it is. Anyone who is thinking of Jamie Dornan (who plays the nameless The Man) as the guy from the Fifty Shades of Grey movies should immediately throw that thought out the window. Dornan does remarkable work here as a man who has no memory of who he once was, and it's not just his actions and dialogue but the fine nuances of facial expressions that capture his angst, fear, and frustration at not being able to understand why formidable forces are trying to kill him.
Helping The Man find his way across this landscape of despair is Probationary Constable Helen Chambers (a simply luminous Danielle Macdonald). In her earnest desire to help The Man find his way, Chambers puts herself in danger and her relationship with Ethan (Greg Larsen) in jeopardy. The smug Ethan believes he is the "catch" in this pairing, but after watching six episodes of Chambers making every effort to help The Man find answers (and Macdonald realizing the character so fully), the viewers understand how Ethan should be counting his lucky stars. 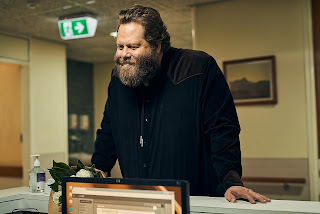 The series starts with The Man making a pit stop on an outback road to nowhere. He buys some things for his road trip, uses the bathroom (and complains about having to sign his name to get the bathroom key), and then proceeds to get back into the car to continue his journey. A huge tractor trailer zips by out on the road, and before long The Man is being chased by a death machine driven by a mountain of a man named Billy (Olafur Darri Olafson). Eventually, the truck crashes into the car and seemingly destroys it and its passenger. I couldn't stop thinking about the TV movie Duel directed by Steven Spielberg and starring Dennis Weaver because it had a similar scenario, but it ends there with the crash. 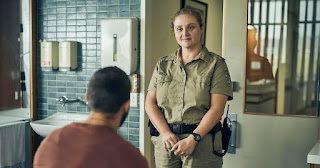 While recovering in the hospital, The Man is visited by Constable Chambers who tries to get to the bottom of what happened to him. The only clue is a piece of paper in his pocket with a place and time for a meeting on the following day. The clue doesn't make sense to Chambers, but this is the start of their partnership as she investigates and starts ruffling feathers, including the homicidal Billy. 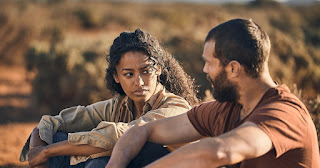 The Man checks himself out of the hospital the following day and gets on a bus. He plans to make that meeting in the small town of Burnt Ridge (a kind of outback Twin Peaks) in the town diner. There he is asked to sit in a certain booth and wait for the meeting, but beautiful waitress Luci (an impressive Shalom Brune-Franklin) spills a drink on him and needs to take him across the street because the diner loo is out of order. While crossing the street, the apologetic Luci continues directing The Man when the diner behind them explodes from a planted bomb. 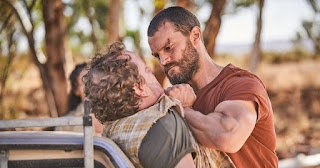 Now The Man knows whoever is after him really wants him dead, but has no clue as to what to do next. Since Luci is out of a job and is sort of attracted to The Man, she offers to help him and finds him a place to stay in town. Sometimes in his quest for answers, The Man erupts in fits of rage that, when over, surprise us and even him. It leaves us scratching our heads and asking, "Who was this guy?" 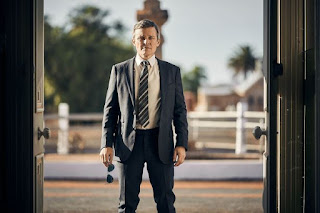 The explosion has now alerted the authorities, and Detective Inspector Lachlan Rogers (Damon Herriman) is sent to investigate kind of like Dale Cooper (Kyle MacLachlan) going into the town of Twin Peaks. Rogers even starts working with local law enforcement, and Sgt. Rodney Lammon (a hilarious Kamil Ellis) is assigned to him. While TP has lots of supernatural elements that The Tourist does not, there are an assortment of crazy characters that give Burnt Ridge an appealing under current of humor despite the serious implications of the dark forces that are heading its way. 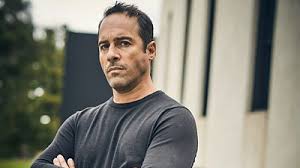 Will The Man, Luci, Chambers, Rogers, and Lammon be able to take on the enormous Billy and Kostas, the man for whom he works (Alex Dimitriades) and his organization? The rest is spoiler territory, and it is far too good to ruin it for anyone.

The acting is exceptional here, and even minor characters are given a chance to glow. Dornan proves his strength as an actor as he slowly puts the pieces of his identity together, and there is a shocking and powerful scene in episode six where a woman from his past whom he keeps seeing in his dreams, Lena Pascal (a haunting Victoria Haralabidou) confronts him with a truth that is more than inconvenient. Dornan's reactions (both physical and emotional) are harrowing as we witness his coming to terms with his past.
The amnesiac protagonist has been done before (think Total Recall, The Bourne Identity, Memento), but here there is a combination of humor, pathos, and rage that is very powerful. I've always found it intriguing that after these characters lose their memories that they come back as better versions of themselves, finding it difficult to believe that they were ever capable of the things that they did. Perhaps it's nature's way giving them a second chance, but The Man has questions about that and learns things that he may feel put him beyond redemption.
The Tourist leaves The Man with a revelation that shakes him to his deepest soul, and the overwhelming question is can he accept what he was now that he is the man that he is? And can Chambers or Luci help him? You'll have to watch until the last seconds of episode six to get the answer.
I highly recommend The Tourist for your viewing pleasure. Those six episodes move quickly and leave us hoping for more. What about it, HBO Max? Will you grant our wishes?
Please check out the official trailer for The Tourist.