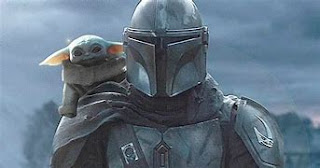 Season 2 has seen the bond between Grogu (he will always be Baby Yoda to me) and Mando (Pedro Pascal) grow deeper and stronger. From the beginning of the series, the incongruous relationship between the seemingly ruthless bounty hunter and the vulnerable child has captured viewer’s hearts. Perhaps it is Mando’s childhood (as seen in flashbacks) when he was in danger on Mandalore that triggered some empathy, and the fact that his usual bounty targets were mostly vicious scum of the galaxy types not innocent children.

There is magic when the two characters are on the screen together, and a father-son relationship has been established. Mando admonishes Grogu when he touches things in the cockpit or tries to eat the Frog Lady’s (Dee Bradley Baker) eggs, but in a gentle and loving way. Grogu in turn loves Mando and looks to him for support and approval. It is truly amazing how this duo has been portrayed.

This season saw the return of great characters from season one like Cara Dune (Gina Carana), Greef Karga (Carl Weathers), Fennec Shand (Ming-na Wen), and Giancarlo Esposito as the villain Moff Gideon. In this way the series has deepened the ties between Mando and his friends and also placed a formidable big bad in their way.

*Please stop reading if you wish to avoid spoilers.

Besides bringing back characters from season one, this season has also brought back beloved characters from other Star Wars films and TV series, and this has been the best Christmas gift fans could receive. For example, it was a risky choice to bring back the iconic Boba Fett (Temeura Morrison – the actor who played Jango Fett in Star Wars: Revenge of the Sith) since he was last seen falling to his presumed death in the sarlacc pit in Return of the Jedi.

As we have learned in the Star Wars universe, being dead is about as sure a thing as it is in the comic book world. Darth Maul somehow survived being cut in half in Star Wars: The Phantom Menace to appear in the animated series Star Wars: The Clone Wars and Star Wars Rebels, and in Star Wars: The Rise of Skywalker, it is revealed that the dastardly Emperor Palpatine (Ian McDiarmid) managed to survive falling down a reactor shaft in Star Wars: The Return of the Jedi, so precedent has been set.

Fett has somehow survived – and has the scars to show his suffering at the hands of the fanged, multi-tentacled beast. Being the clone son of Jango – the bounty hunter deemed such a superior warrior that they used him as the model for all clone troopers – we know Fett has what it takes to get the job done. Teaming him up with Mando makes sense as they are both not true Mandalorians – Mando being an immigrant who moved there and Fett being a clone – and yet they both wear their Mandalorian armor with great pride.

Other beloved returning characters include Ashoka Tano (Rosario Dawson) and Mandalorian princess Bo-Katan Kryze (Katee Sackhoff). While they do not appear in scenes together, their connection is a strong one as we know from the animated series – it is Ashoka who gives the Dark Saber to Bo-Katan to confirm her leadership on Mandalore. It is this same Dark Saber that Bo-Katan somehow lost to Moff Gideon, and she wants to get that back.

Of course, Gideon not only possesses this weapon, but has also kidnapped Grogu to harvest his blood. Earlier in the season we saw Dr. Pershing (Omid Abtahi) working in a lab with what looked like human clones. Gideon reveals that he hopes to harness Grogu’s power to “restore order to the galaxy.” If you watched the sequel trilogy and wondered how the hell The First Order got started, Favreau and company are giving us an answer.

Mando issues a hologram warning to Gideon at the end of episode 7, telling him that he is coming to get Grogu. The fact that Gideon is safely ensconced in an Imperial cruiser seems not to matter to Mando in the least. What this season has revealed is that five years after the events of ROTJ and under the noses of the leadership of the New Republic, these remnants of the empire are well funded, have thousands of stormtroopers, and numerous vehicles and ships at their disposal. Who or what is behind them? From what we know from TROS, Palpatine is engineering all of this from afar.

In episode 8, Mando and his team – Fett, Bo-Katan and her fellow Mandalorian Koska Reeves (Sasha Banks), Fennec, and Cara – set out to save Grogu. It’s a phenomenal sequence of battles aboard the cruiser, and there is an especially intense battle scene between Mando and one of the Dark Troopers (seemingly invincible robots). Mando has managed to send them all out an airlock into space, but one makes it back inside and attacks him. Mando manages to defeat it but with great difficulty.

As the others on the team take down slews of stormtroopers, Mando locates Grogu’s jail cell, but unhappily finds Gideon holding the Dark Saber over Grogu’s head. At this point my son and I both gasped, and I hit the pause button and thought about it. I said, “Don’t worry, nothing is happening to Baby Yoda.”

Hitting the play button, I soon discovered I was right. Gideon says that he has what he needs from Grogu (his blood), and that they can leave. As Mando turns to take the child, Gideon tries to attack him. A nice battle then ensues with Mando using this beskar spear. Beskar is the only material that can stand up to a light saber (as we saw in his battle with Ashoka), or in this case the Dark Saber.

Mando defeats Gideon and takes him to the bridge of the ship where Cara and company wait for him. Bo-Katan is a bit amazed that Mando has the child, Gideon in handcuffs, and has the Dark Saber. All seems good at this point, but the snickering Gideon is not licking his wounds. When Mando tries to give her the Dark Saber, Bo-Katan cannot accept it – it must be won in battle – and Gideon was gleefully aware of this, which means Mando is actually now the one who can sit on the throne of Mandalore.

Now, I never go against my men the F boys – Filoni and Favreau are rescuing Star Wars from itself – but they’re forgetting something from Rebels. In that series Ashoka just gave the Dark Saber to Bo-Katan. If she could do that then, why change the rules now?

Things go from bad to worse when the gang realizes that the Dark Troopers that Mando sent out into space are able to fly, and the deadly platoon is back and heading toward the bridge. Mando just barely defeated one, so even with our powerful group of fighters, the truth is that they are about to be slaughtered.

Now, on a security monitor a lone X-wing comes aboard the cruiser. Soon we see a robed figure with a dark hand igniting a green light saber. My son and I both looked at each other and said, “Luke!” The Jedi mows down the Dark Troopers like they are nothing – which my son brought up is reminiscent of Darth Vader mowing down rebel troopers at the end of Rogue One. In that film it was scary, but here Luke is the cavalry.

As Luke (the CGI to create the young Luke is outstanding) is busy doing his thing, Grogu watches on the monitor and touches the screen with his hand. We remember that in episode 6 in the ruins of the Jedi temple on Tython, Grogu had a powerful force experience before being kidnapped. It seems that he must have been reaching out to any Jedi, and Luke got the message.

The hardest part comes next – once he defeats the Death Troopers, Luke wants to take Grogu and train him properly. Mando’s mission was to reunite Grogu with his kind, and now that is complete, but the bond between ostensible father and child is strong.

Mando notes that Grogu is afraid to go, but Luke says that the child is asking for his permission. As they stare at one another, Grogu touches Mando’s helmet – up until this point he has never seen Mando’s face – and in the most emotional scene Mando removes his helmet and allows Grogu to see him. It’s heartbreakingly beautiful, but in this case, father knows best, and Mando makes the sacrifice and allows Grogu to go.

As Luke leaves with Grogu, he says, “May the force be with you.” The group all stand watching him leave with the child, and then we feel our stomachs drop. We know more than Mando and the rest. We remember from the sequel trilogy that eventually Luke’s nephew Ben (who will become villain Kylo Ren) will train with Luke too. Ben is probably around four years old at this point, so it will be awhile before he becomes a threat.

So many questions remain, but my biggest one is this – will Grogu be in season 3? How will Mando find him since he doesn’t know Luke’s name or where he is going? What about Bo-Katan? She has her cake (Gideon’s her prisoner) but she can't eat it too because Mando has the Dark Saber. Will she fight Mando? Will Mando go to Mandalore and help her save the planet? It’s going to be a busy season 3.

The Mandalorian is the best Star Wars story in a long time, and this season was amazing. I for one vote for Filoni and Favreau to head Disney's Lucasfilm for now until the end of time, or at least until they want to retire.

Oh, be sure to watch the credits after episode 8 – my son and I always do so because they show slides of the concept art for each episode – but there is a little delicious nugget afterwards that you will want to savor. Enjoy!

Great stuff! There is a considerable development of popular characters on "The Mandalonian" in the 2nd season.

Great stuff! This is a considerable review of popular characters on Season 2 of "The Mandalonian".

Thank you, Dr. Maresca. I always appreciate your input.